A team from South West Garage doors will be cycling the length of the UK, the hard way, in aid of cancer research. The 234 Challenge – Top 2 Bottom, 3 riders 4 Cancer Research – will set out from the most northerly point in  Scotland, Dunnets Head on September 5th. The team expect to reach their destination, the southern most tip of England, Lizard Point, 9 days later, an average of over 92 miles a day.

Covering the 833 mile route from North to the South is considered the most difficult direction to chose as the geographic formation of the UK means steeper hills have to be climbed at the end and the prevailing “summer” winds are usually from the southwest, and will be in their faces.

Though keen leisure cyclists, the three man team of Jon Burtenshaw, his son Jack Burtenshaw and colleague Matt May have never considered anything like this before. Having shared the trauma of family members suffering from cancer the trio where determined to do something to fight the disease.

Support has already been received from Hörmann (UK) Ltd and their Transport Manager, Mick Dunne, who is supporting the team, but Jon Burtenshaw is calling on the door industry to help them to smash their modest £3000 target. “This will be the only time we are going to do this, and to be honest, I’m not looking forward to the pain but hope we can achieve a great deal for a very worthy cause.” If you want to contribute to the fundraising effort go to www.justgivingcom/234challenge  and don’t forget to add some words of support. 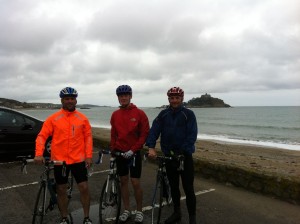